History of the Cup & Saucer


The History of the Cup & Saucers
Coffee was originally served in a can-which was a metal cylinder with high straight sides that had a handle.The metal cylinder's measured approximately 2 1/2" high & 2 1/2" in diameter (this is where the term "can shape" cup derives from. However, there was a problem, the "metal cans" became very hot due to the hot liquid inside the metal cup, making it difficult to hold on too. In the middle 1800's the problem was solved, a new, more elegant form of the coffee can emerged using porcelain & bone china instead of metal. By using these materials, the potter's were also able to produce the cups in a variety of forms & decorative designs. The saucers at this time in history had a center depression in order to hold the cup & were referred to as a "coffee stand" rather than a "saucer". The coffee cup & saucer is the largest in the cup & saucer family, (not shown in picture). Today's average cup measures approximately 4-4 1/2" tall & the saucer measures approximately 6- 61/2" in diameter.

The History of the Tea Cup & Saucer
An early custom of drinking tea was to drink it from a "tea bowl", designed with curved sides the tea bowl, looking much like the saucers we know today, were used due to the larger surface area, which allowed the fluids to cool down more rapidly. The "East Indian Trading Company" in the 1700's was the first to import the tea bowls from China. The tea bowls were also designed to hold less fluid than the metal cylinders that were used for coffee, due to the high cost of tea at the time. In the 1800's the tea cup with higher sides & handles became more popular than the use of the tea bowls, due to the fact that the tea bowls became very hot & due to their short sides, they were very difficult to sit down on a flat surface. The new form of the tea cup became universal. As the tea cup developed, the saucer became smaller, now functioning as a cooling place to hold onto while the hot tea cup rested in the center of the small plate, which also became a handy place for the tea drinker to rest their teaspoon. The tea cup & saucer is the next size & most common in the cup & saucer family (far left in picture). Today's average cup measures approximately 3- 3 1/2" tall & the saucer measures approximately 5-5 1/2" in diameter.


The difference in these sizes are very noticeable when the cups & saucers are setting side by side, as shown in the picture or displayed in glass hutch, but it may be very difficult to tell the actual size of a set from a picture of a single set or when the set is setting by it's self on a shelf at a store without another size to compare it too. For this reason I recommend that you always ask the size of a set if you are purchasing it off of the Internet if the size is not already listed in the description (that's how I got the Tea cup & saucer & the Miniature cup & saucer set. They were listed as "Demitasse cups & saucers" & it wasn't until I unpacked them that I realized they were NOT Demitasse cups & saucers). I also recommend  that when you are shopping at an Antique store that you carry a small pocket measuring tape (found at most hardware stores) in order to check the size before you get it home. It will save a lot of disappointment of placing a set among your collection only to realize it's the wrong size.

For all of you experts out there, you are right, I did forget one other type of cup & saucer set, the Chocolate cup & saucer, pictured below. 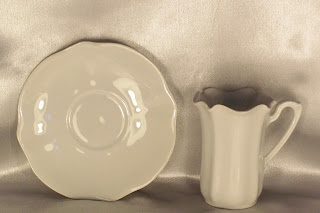 The History of the the Chocolate Cup & Saucer
Chocolate or "cocoa water" has been around since 500 BC when the Mayans & Aztecs would pour "kaka" (cocoa) from one pot into another in order to produce a frothy head of foam, this drink was served cold  & was at times mixed with other ingredients which included chilies & cornflower. The consumption of this drink was reserved for men. By the middle of the sixteenth century the Spanish added cane sugar to the drink in order to cut the bitter taste.The earliest chocolate cup was a standard part of the Spanish chocolate service, which were called "Mancerina", which was a saucer with a depression in the middle in which a porcelain cup would sit without sliding. In the middle 1600's the chocolate drink grew in popularity throughout Europe. The first porcelain chocolate service set dates back to the 1770's & was produced for nobility throughout Europe. In the late 1800's Limoges & Dresden produced fine chocolate sets that are very collectable today. Chocolate drinking arrived in American colonies in 1765 when the very first American chocolate factory, "Walter Baker & Company" opened in New England & is still in operation today. The size of the chocolate cup & saucer is similar to the size of the Demitasse set, with the exception that the chocolate cups are taller & thinner. Today's average cup measures approximately 3-3 1/2" tall & the saucer measures ﻿4- 4 1/2" in diameter.
﻿
Posted by DemiQ at 7:00 PM