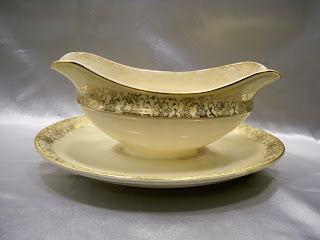 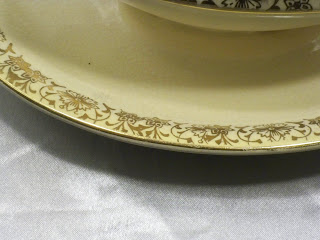 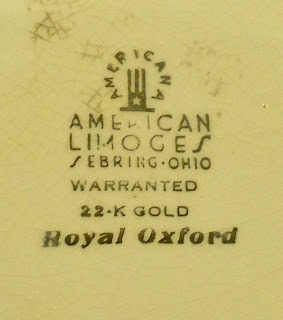 ﻿
This piece is a Vintage "American Limoges" Gravy Boat in the "Royal Oxford' pattern. This gravy boat stands 4" tall, is 10" long, including the "underplate", & is 7" wide, including the "underplate". The background is Ivory with 22K Gold flowers, leaves & stems around both the exterior rim of the "boat" & the rim of the "underplate". This pattern was Discontinued & was only in circulation from 1935-1936.﻿
This piece is available for purchase for $9.99 (or buy it now- for $14.99) at :
http://stores.ebay.com/Demiq-Dishes-N-More
American Limoges
F.A. Sebring first established the "Sterling China Company" in East Liverpool, Ohio in 1887. The name soon had to be changed due to the fact that a "Sterling China Company" was already in operation. The "Limoges China company" was then founded in Sebring, Ohio on East Georgia Ave. The main objective of the Limoges china company was to create a thin porcelain product similar to the materials used in Europe. In order to accomplish that goal many of their raw materials were imported & at a great expense! Three years later a fire destroyed the plant & the ceramic expert died. Also lost was all of the formulas, equipment & records. after they re-built, the company began to produce earthware & semi-porcelain. The Limoges company developed one of the first "tunnel kilns", replacing the old "beehive" kilns that had been in use for hundreds of years. The Limoges company ended the belief that only English raw materials could be used & showed that American raw materials are equal to & in some cases, superior in the production of Earthware products. In the 1940's "American" was added to their name due to the fact that there was a French company operating under the "Limoges" name. In 1955 the American Limoges china company fell into banruptey & they closed their doors.
Posted by DemiQ at 8:26 PM